Andrew got pissed. Andrew let me know that we had one job to do – out hike the Montana yuppies at all cost. Andrew and I “speed hiked” the entire return trip. We passed them up, and the man then tried to keep up with us. We left him in our dust. It doesn’t matter ethnicity, gender, or other background. A spoilt brat is spoilt brat, and that guy deserved a paddling.

The sun comes up damn early in Arizona. Like 4:45 AM. Even after hiking Bright Angel, Mother Nature can ensure that you’ll get your butt moving. It was hard to say goodbye to the Mather Campground, but the itinerary says it’s time to move.

We drove to the Pine Flats Campground in the Coconino National Forest, roughly halfway between Flagstaff and Sedona. Sonia picked a great area. The campground is located between 2 mountain ridges. Although it gets HOT in Sedona, we avoided most of the heat. The sun comes up early, but doesn’t get above the east ridge until almost 7:45 AM. It is heavily forested, so you avoid a lot of direct sunlight during the day. By 4:30 PM, the sun drops below the west ridge, so you cool off early. Plus, Oak Creek runs through the campground. Suffice to say, we were able to beat the heat.

An old college friend, Celeste, came up from Pheonix with here husband and toddler to chat while we set up camp. It was great to reconnect with someone after nearly 20 years. Most of the conversation was focused on the future, which was fantastic. Nostalgia has its place, but I’m not much of one of nostalgia for nostalgia’s sake. They were quite kind, and gave us a thumbnail on the surrounding area. I was sad to see them go. 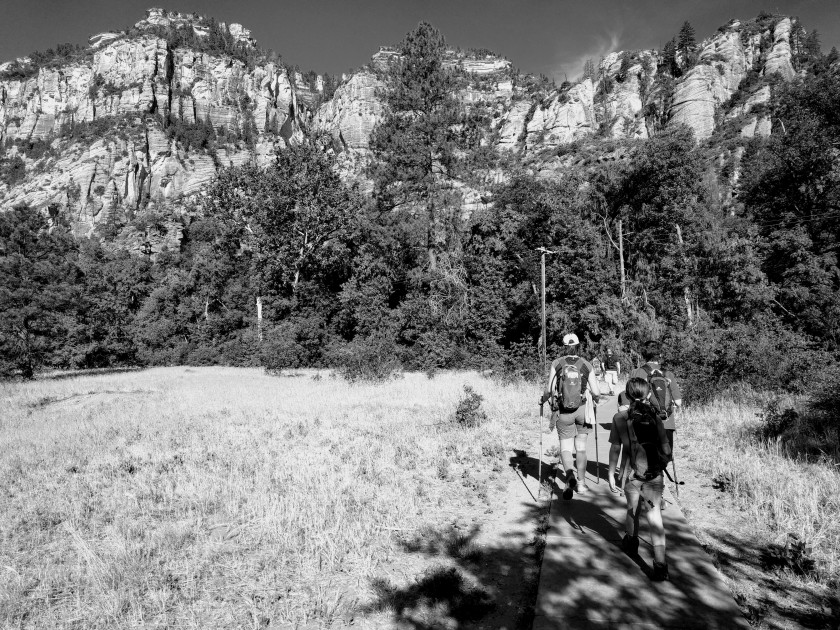 Some friends of ours from Tucson (Lori and Patrick) camped with us for two nights. After 9 days of just the four of us, they were a most welcome interruption. We hadn’t had a nuclear war, but The Boy might have been itching for some outside the family attention. On the one full day we had together, we went to Slide Rock State Park. If you get the chance, go. Oak Creek runs through the canyon, and has carved out a really great place to swim and slide on the rocks. You get pushed down little chutes into deeper pools of water. And you can jump in to deeper pools from some low cliffs, which Andrew and I were all over. I was amazed by the crowd of people; everyone was friendly. I state this because Johnson Shut Ins is similar in Missouri, but is frequently overrun by drunks on the weekend. I’d go back to Slide Rock in a heartbeat. I’ll go to Johnson Shut Ins again when they install a breathalyzer by the river.

Today we took the kids hiking on a trail along the West Fork of Oak Creek. Sonia had read in one publication that this hike was rated as one of the ten most beautiful hikes in America. This seems a little arbitrary. As with many things, what determines beauty? Who decides? What are the criteria? It seems like a needless boast.

Objections about the boast aside, it is a fantastic hike. You basically hike along the banks of the creek, which are heavily forested. There are huge, red/orange cliffs that are several hundred feet high on either side of you. Each time you cross the water, you are treated to panoramic views of the canyon, each worthy of their own postcards. The trail is relatively flat, and ambles 3+ miles to the official turnaround, although you could continue to make your own way for several miles upstream.

We arrived early, and were cut off by a car from Montana that cut in line as we entered. The person then parked right on the very edge of their parking space. The man then mouthed off to Allison to “watch it” when she opened her car door. Andrew got pissed. I understood his perspective. The guy was about my age, was dressed in designer clothes, walked slowly, and carried himself like the world revolved around him.

Andrew let me know that we had one job to do – out hike the Montana yuppies at all cost. Andrew and I “speed hiked” the entire return trip. We passed them up, and the man then tried to keep up with us. We left him in our dust. It doesn’t matter ethnicity, gender, or other background. A spoilt brat is spoilt brat, and that guy deserved a paddling.

Jen and Ben Rosario were kind enough to have us over for dinner in Flagstaff. We must have smelled horrible after five days of camp showers. We had a non-campfire meal, conversation for 3+ hours, and a real shower (maybe as much for their benefit as ours). For those who don’t know, Ben is the head coach for Northern Arizona Elite (sponsored by Hoka) and trains distance runners. Ben had my ear a few years ago, and it is partly due to his advice to “heal up” that I took this sabbatical. I owe him something for that; probably more than the six pack of Budweiser I brought to his house, but that’s what he wanted. Jen is a true renaissance woman (web design, sewing, you name it, she probably does it), and she’s incredibly generous to top it off. I’m amazed by people that have a wealth of knowledge in more than one area. Sonia left in the car saying “I wish we got to see more of them.”

We leave for Arroyo Grande in the morning. We’ve told the kids to not to get to accustomed to a bed, hot water showers, and non-camping meals. It’s probably falling on deaf ears.

What have I learned over the first third of the trip?

-New Mexico drivers act like they just missed a much needed dose of ADHD medication.

-Tons of friendly people in campgrounds and on hiking trails.

-New Mexico has the best food in the country. When you have red and green child, you don’t need other moves, but they have extra moves, too.

-I’d still like to see more if New Mexico; I don’t know what the people who live there are actually are like (the general feel of the larger towns). The campers are great, but I’m still trying to figure out the local culture. I do like what I see…

-There are douchebag yuppies, even from Montana.

-I should have done this trip with my family years ago. But at least my kids will remember it because we waited.

-Corollary: I should have stood up for myself years ago. I need to remember that one.

-More people deserve to do the same thing and have the same opportunities that I have. This is great, but I must admit that I’m not special.

-I wish more people could do the same type of trip that we are doing for our family.

-While I think about the future frequently, it no longer scares me.

I am a 44 year old high school chemistry teacher (and former pediatrician), happily married, and a father of two wonderful children. I blog sporadically, and if there's a theme in here, please tell me what it is! View all posts by Jason Kesselring

If you go out to race and know you'll lose, there's no probability involved. You'll lose. But if you go out knowing you will never give up, you'll still lose most of the time, but you'll be in the best position to kick from on that rare day when everything breaks right. -Bill Bowerman
Loading Comments...
%d bloggers like this: