Meanwhile, we bumped into our NJ friends, and they weren’t doing so hot. Victoria looked like ten pounds of shit stuffed in a five pound bag (I stole that line from a book entitled Running with the Buffaloes, and wish I could use it with greater frequency).

When undertaking a trip of this magnitude, a lot of planning has to happen. You need to know in advance where you are sleeping, supplies, tentative budget, and a general idea of what you’d like to explore. Yes, life is fun when you leave some things to chance, but when traveling with children (even adaptable ones), it’s helpful to know SOME details first.

We drove to the north rim of the Grand Canyon to hike the North Kaibab Trail (NKT). This is the only trail at the north rim to descend to the Colorado River. If one wants to hike rim-to-rim (or crazier people still will do a rim-to-rim-to-rim), you HAVE to take the NKT. The north rim is very much different from the south. The north rim is at higher elevation (above 8000 feet), it’s colder, there’s more water (think snow melt as the north rim frequently is only open from sometime in May to sometime in October), there’s more vegetation, and it is more remote. Sonia chatted with a friendly volunteer rescue coordinator, and he told her that the south rim gets over 6 million visitors per year. The north rim (given its shorter season and being more difficult to access) gets around 200,000. If you are going to the north rim, you have to WANT to go there.

I researched, or so I thought, the NKT. It had a similar turn around for both groups (Sonia and Allison at a bridge for 5.5 miles and Roaring Springs for me and Andrew making a ten mile trek). The elevation drop appeared close enough as well. It would be akin to our hike on the Bright Angel Trail (BAT) a week and a half ago at the south rim. We started early, packed plenty of water and snacks, and hit the trail.

Some of the experiences were in fact similar. The vistas were amazing. There were few serious hikers, and a sizable percentage of hikers were from Europe. It was cool at the start, but warm and breezy close to the finish. I can’t say that I prefer one experience over the other.

Having said that, there are differences. The BAT has very firm, flat, almost slippery footing with wide trails. Its descent may change in grade a bit, bit never really levels out. It’s more open to the rock (plus lower in altitude) and hotter. With the lack of vegetation, you can see distinctly where you are going at all times.

The NKT has very loose soil, almost sandy, and the trails are narrow (some very close to significant drop offs). This is good for a softer landing when going downhill, but it also makes the return trip more taxing (the energy from your foot hitting the ground disapates, thus slowing you down). The vistas come in spurts (but truly are breath taking).

It is also considerably steeper. This is the biggest point. Yes, the start and end give you the same net drop in elevation. HOWEVER, after crossing the bridge after 2.75 miles of walking only downhill), it goes back up. And then flat. Then down again. THEN, it goes back up AGAIN. Then you finally complete a descent to Roaring Springs. This is to say that there is considerably more total elevation change than simply by measuring from point A to point B. So the trail as a whole is at a much more difficult grade/slope to compensate for this.

We hiked as a group to the bridge in just under two hours. We split up. It took three hours for Allison and Sonia to make the return trip. Allie-Al is past, for the moment, of her fear of hiking and kept a positive way about her on returning to the north rim. They spent some time talking to the friendly volunteer referenced earlier (details later) and made some cool drawings based on the promised reward for the hike today (pictures in a bit).

Andrew and I made our way down the trail to Roaring Springs. We met a couple from New Jersey that left Roaring Springs shortly after our arrival (they reappear in a minute), and a couple from Holland. We chatted up our friends from Holland. They had been touring the Western US, and still had four or five national parks to go. They told The Boy to eat, and offered him some “crisps” (potato chips). Being a Kesselring and never turning down free food, even when we are fully supplied, he gratefully obliged. After a 15 minute refueling and conversation session, we hit the trail. 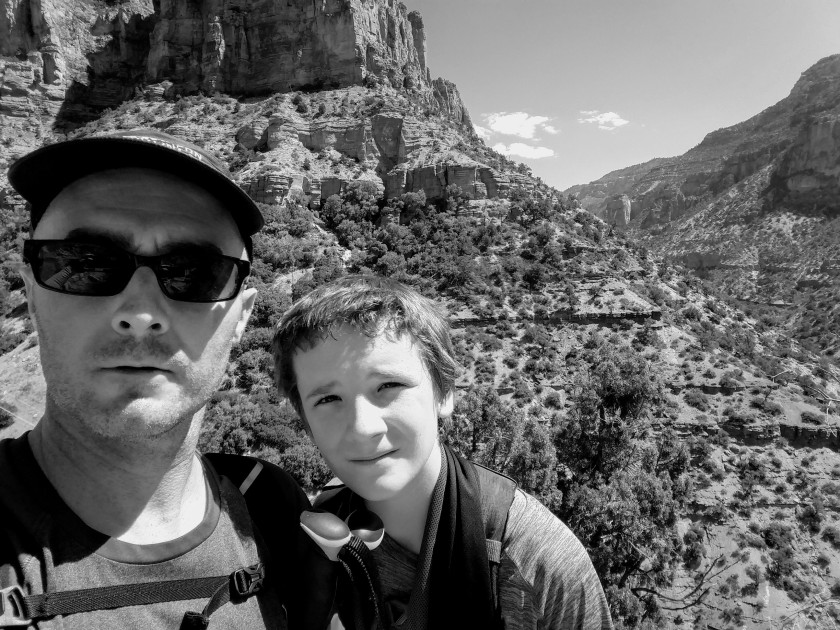 And that’s when it hit. Andrew started having labored breathing on the third ascent. He normally takes off rapidly and doesn’t slow down until he bonks. That strategy wasn’t going to work today. We stopped, and he continued to breathe rapidly. He was panicking about the trip to the top, with just over 4 miles to go. He couldn’t just blast it this time, and he didn’t know what to do.

We talked for a minute. I told him he was ok and he is a strong hiker. We just hadn’t been on a trail this steep. I told him we had plenty of food and water. I put it this way; we had to walk back to the top, but nobody said we had to be fast. He understood that. I took the lead, and was deliberately slow. When he wanted a blow, we took one, no questions asked on my part. It might be one minute, or it might be ten. We played a game trying to think of and memorize something gross with each letter of the alphabet. We made jokes.

By the time we got back to the bridge, he was back on form. We just took our time. Meanwhile, we bumped into our NJ friends, and they weren’t doing so hot. Victoria looked like ten pounds of shit stuffed in a five pound bag (I stole that line from a book entitled Running with the Buffaloes, and wish I could use it with greater frequency). Her boyfriend (Naveen, and I sincerely hope I am spelling the nice man’s name correctly) was trying to keep her upbeat. As we found out, they ate a light and quick breakfast to get on the trail early. Classic calorie crash. We stayed close to them, and gave Victoria some food (they had ample water). We would speed hike for a few minutes, then wait for our friends in the shade for a minute so they could catch up. We were legitimately concerned about her.

Close to the top, a group of German teenagers told us we had two minutes to the trailhead. Andrew left me in a cloud of his dust and SPRINTED to the top (thanks for your help, Dad!) where Sonia and Allison were waiting. I let out an excited “whoop” so our friends knew they were close. I explained what was going on to Sonia with regards to Victoria. Sonia sprang into action. She gave them two bags of Sunchips (the whitest snack ever, I know, but she needed carbs and salt). Naveen filled a huge jug of water, and Sonia gave them enough Gatorade powder to make a half gallon. We chatted and joked for five or ten minutes, and then we needed to leave. Victoria was looking human again. We gave hearty handshakes “goodbye”, and they thanked us profusely. I wish I would have given them a link to the blog.

We rewarded the kids with PIE. After dinner, we went to the Jacob’s Lake Inn, which has a restaurant. We had a tip from a nice woman in our campground that their desserts were amazing. All I can say is this: if you are ever in a four hour radius of Jacob’s Lake, AZ, you have to eat there. The place was a classic, and dessert didn’t disappoint. Andrew had the Best. Fudge. Brownie. EVER. We’re going back for cookies tomorrow night.

Tomorrow will be a no-hike day. We need some rest. We leave in two days for Bryce Canyon. I told the kids that on my deathbed, I’ll remember today.

As a parting shot, I’ll leave you with some information given to Sonia by the volunteer. Preparation, for any endeavor such as hiking in the Grand Canyon, is key.

-The volunteers RUN down the trail (usually paramedics that are young and fit), and can give IVs if needed.

-There are approximately 250+ rescues per year. Most are in the summer and are launched on the south rim (remember the difference in the number of visitors).

-For most rescues, the problem is usually related to heat illness. Typical treatment is rest, drinking plenty of electrolyte containing fluids, and eating. If you need their help, they recommend very strongly that you take four hours of treatment before returning to the rim. As an aside, you are likely to be given water, salt tablets, potato chips, and/or Doritos as a starting point.

-If needed, a helicopter can fly in a basket with IV fluids. If dire, they can land a helicopter to extricate the person. The helicopter is based at the south rim and can be at the north rim within 10 minutes. The trails between the north and south rim are protected airspace for only the National Park Service for medical reasons or to make repairs (maintenance of water pipes in the canyon for example).

-The number one animal related injury in the Grand Canyon is: squirrel bites (from aggressive squirrels taking food from the hands of hikers).

-The biggest problem (editorial from the worker today) leading to the rescues is the lack if fitness and training of the people prior to arriving in the Grand Canyon. For example, they administered treatment to TWELVE unrelated hikers in one day last week at the Three Mile Resthouse on the Bright Angel Trail (all heat illness, all lack of proper preparation).

I am a 42 year old high school chemistry teacher (and former pediatrician), happily married, and a father of two wonderful children. View all posts by Jason Kesselring

If you go out to race and know you'll lose, there's no probability involved. You'll lose. But if you go out knowing you will never give up, you'll still lose most of the time, but you'll be in the best position to kick from on that rare day when everything breaks right. -Bill Bowerman
Loading Comments...
Comment
×
<span>%d</span> bloggers like this: